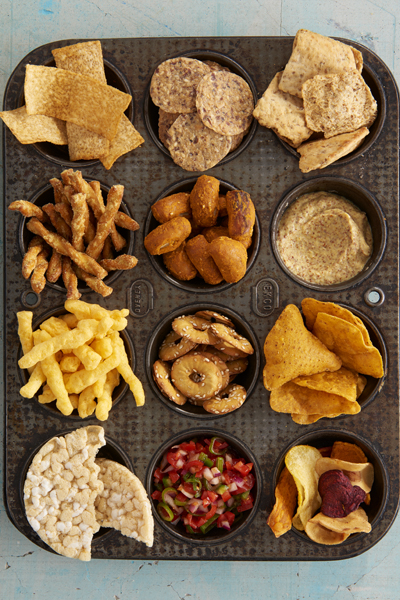 Chips, pretzels, and snacks with interesting ingredients, unconventional bases, and bold flavors are standing out among a crowded field.

Snacking to distract gained prominence during the pandemic as Americans helped ease their nerves with mainstream varieties of chips, pretzels, and other snacks. But now as COVID restrictions lift, consumers are prioritizing their health and looking to better-for-you varieties.

“We saw a lot of emotional eating early on and a resurgence around comfort foods from childhood and legacy-branded salty snacks, and as it dawned on everyone that the pandemic was more of a marathon than a sprint, folks recognized ‘I should eat with health and wellness and immunity in mind to have greater physical, mental, and emotional resilience,’” says Shelley Balanko, senior vice president at The Hartman Group.

This mindset bodes well for the specialty chips, pretzels, and snacks category, which boasts better-for-you innovations, inventive forms, and upcycled ingredients. While sales in the category were up a sizeable 14 percent in 2020 versus 2019, according to the Specialty Food Association’s newly released State of the Specialty Food Industry report, 2021-2022 Edition, it underperformed the overall brick-and-mortar retail specialty food market, up 19.4 percent, in 2020, due in part to the closure of schools, gyms, and workplaces.

Still, Americans continue to reach for salty snacks, with 76 percent consuming them on a weekly basis, according to The Hartman Group’s Snacking, Emerging, Evolving, and Disrupted report, and one-third (33 percent) seeking them more than they did a year ago.

In an increasingly crowded snack market, of which specialty chips, pretzels, puffs, straws, popcorn, meat crisps, and other salty snacks hold 20.4 percent share, better-for-you ingredients and flavor innovations are standouts, according to Mintel’s Trending Flavors and Ingredients in Snacks report.

Healthier Formulations
Cauliflower, beans, and legumes are being featured in the form of chips, crackers, and puffs, and mixing seeds and vegetables that provide micronutrients or reduce sugars, carbs, or calories, present opportunities to balance health with the fun side of snacking, according to the report. These ingredients are piquing consumer curiosity, with more than three-in-four shoppers (77 percent) interested in trying some type of alternative ingredient.

At West Des Moines, Iowa-based Hy-Vee, health-minded shoppers are gravitating towards plant-based chips made with vegetables such as cauliflower, beans, or ancient grains, as well as grain-free, and keto-friendly snacks, and options that are high in protein, says dietitian Elisa Sloss, who is vice president of the grocery chain’s HealthMarket store-within-a-store concept.

“The start of the pandemic was an anxiety-ridden time where people were naturally reverting to what they could control and how to find comfort, so there was a big uptick in snacking,” she says. “Now, as life returns to normal, people are looking for better-for-you foods.”

Snacking to Save the World
At online grocer Hive, which vets specialty products for taste, ingredient integrity, low carbon footprint, recyclable packaging, and a commitment to social good, consumers are encouraged to “snack like it’ll change the world,” and can filter products by dietary parameters such as vegan or gluten-free; attributes like B Corp or BIPOC Owned; and the causes that brands are linked to such as Education or Poverty & Hunger relief. 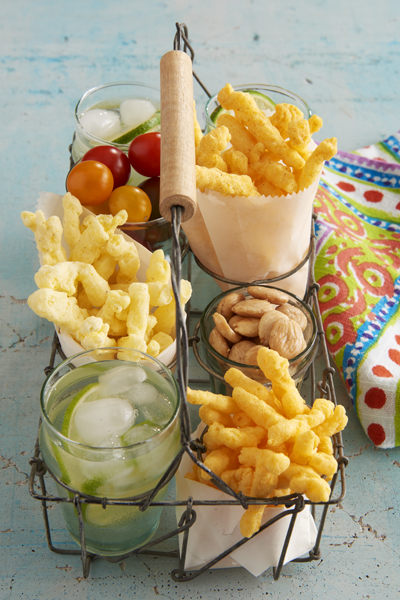 Shiitake-based Pan’s Mushroom Jerky, available in flavors like Applewood Barbecue, Zesty Thai, and Salt & Pepper, is a best-seller, according to Kate Harper, chief brand curator at the retailer. “Even the meat eaters here can’t believe that they’re made with mushrooms,” she says.

Hive’s offering also includes upcycled snacks from Regrained which uses spent grains from the beer brewing process to make its Supergrain+ Puffs in flavors like Texas Pit BBQ, Mexican Street Corn, and Aged Sharp Cheddar with Parmesan and Bleu Cheese. Pulp Chips from Pulp Pantry are made from pressed vegetables and use 50 percent upcycled ingredients, while Kettle Cooked Uglies Potato Chips are made from “ugly” potatoes that would otherwise end up in landfills, given their appearance. “People don’t always connect that food waste can be turned into a delicious, new CPG product,” Harper says.

Bold flavors are also adding to the appeal of specialty chips, pretzels, and snacks, which serve as an ideal base for such innovations, according to Balanko. “This is a place where snacks really shine since for years, consumers have been more interested in these flavors in snacking formats because the investment is lower psychologically and financially,” she says.

Millennials, in particular, are game for such exploration, and, of all generations, are most likely to purchase five or more snack types, according to Mintel. “Snacks act as a source of enjoyment and excitement for these consumers among their daily routines, and at a time where pandemic fatigue, cooking fatigue, and likely flavor fatigue have set in, new and different flavor options can continue to provide the small positive snack experiences consumers enjoy,” according to its Trending Flavors and Ingredients in Snacks report.

Given its close proximity to the College of Charleston and the city’s King Street shopping district, Caviar & Bananas in Charleston, South Carolina, serves mainly college students and tourists, says Joe Caradonna, CEO of the specialty market and cafe.

“We rotate quite a bit of product here; anything weird and wild I can find, I bring in,” he says. “We can get away with offering products that have a higher price point because our shoppers don’t shy away from pricey things.”

Bold Flavors
Chips with bold flavors, like Zapp’s Kettle Potato Chips in Voodoo, which has a sweet, smokey, salty Cajun taste (and a cult following), is the store’s bestselling chip. According to its packaging, it was created by accident after an employee dropped a pallet of spices, tasted the mixture of five flavors, and declared it “delicious.” Locally produced Low Country Kettle Potato Chips in Spicy Pimento Cheese and Bloody Mary flavors, also sell well. When bringing in new product, Caradonna considers a snack’s packaging, and whether it has an upscale feel. “It’s kind of like wine, if it doesn’t look attractive, it’s hard to buy. So it may be great tasting but if the bag is blah, you’re not going to sell it.” 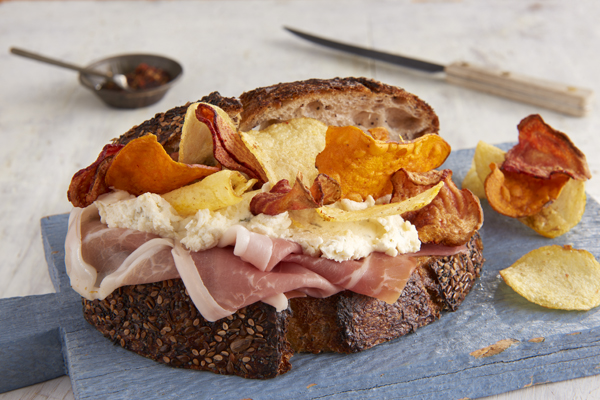 Imported snacks also appeal to Caviar & Bananas’ shoppers and Caradonna merchandises items from Europe on a large marble table. “We sell an astronomical amount of Torres Chips from Spain,” he says. “They come in Black Truffle and Iberian Ham flavors. People go crazy for them because you can’t get anything like that anywhere else in town.” Dutch Van Strien Cheese Straws and The Pea Green Boat Cheese Sables with Fennel and Chilli from Scotland are also popular. “These almost taste like the burnt end of a pizza crust, and they are delicious,” Caradonna says.

Given its clientele, Caviar & Bananas is wise to merchandise international flavors which appeal to members of Gen Z. “Latin, Asian and Middle Eastern cuisines have been gaining traction with differentiation taking place among sub-regions, and these international cuisines all deliver bold flavor profiles featuring sweet, spice, and heavily seasoned dishes,” according to Mintel. It finds that curry, adobo, Baharat, and kimchi flavors are well positioned to gain favor among young consumers.

“Since snack formats are lower stakes, it’s a great place for companies to deliver interesting flavor profiles and it’s where consumers like to play and have fun,” says Balanko. 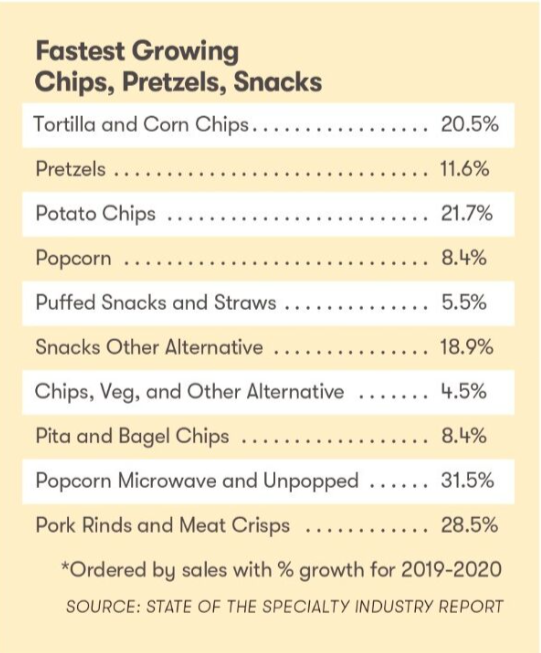 Brewer’s Crackers Baked Pita Chips. When making beer, brewers seep high-quality grains, like barley, in water. They strain the mixture and keep the liquid, while tossing the “spent” grains. Brewer’s Crackers uses these upcycled grains as an ingredient in its pita chips, combining them with wheat flour. Described as having the crunch of a classic pita chip but with added nutrition and flavor, these pita chips offer a good source of whole grains and come in Sea Salt and Rosemary varieties. brewerscrackers.com 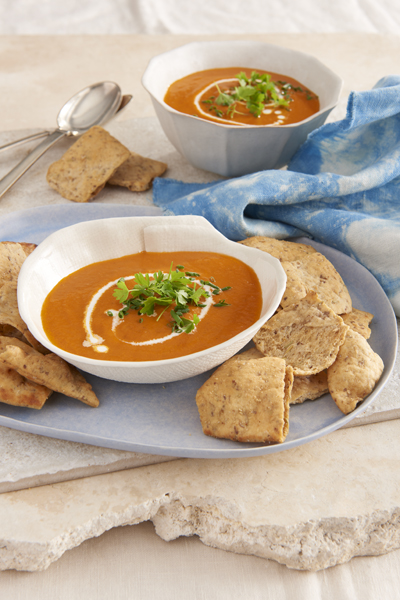 Dream Pretzels Plant-Based Protein Pressels. Baked and pressed protein pretzel crisps, called pressels, are made with a blend of red lentil, white bean, and pea protein. These thin pretzels contain 5 grams of protein and 3 grams of fiber per serving. The snack is Non-GMO Project Verified, vegan-friendly, and free of trans fat, MSG, preservatives, and artificial ingredients and is available in Sea Salt, Everything, and BBQ flavors. pressels.com

Hippie Snacks Almond Crisps. These almond crisps are plant-based and made from real almonds, minimally processed, non-GMO and gluten-free. They come in Sea Salt, Rosemary, and Cheezy Chive varieties. hippiesnacks.com

Late July Vegetable Tortilla Chips. Available in Beat the Heat! Red Pepper and Dangle the Carrot are Late July’s Vegetable Tortilla Chips. Beat the Heat Red Pepper Vegetable are made with chia seeds and are seasoned with chipotle for a hint of spice. Dangle the Carrot are made with teff seeds and seasoned with cumin and paprika. They are Non-GMO Project Verified. latejuly.com

Pipcorn Heirloom Crunchies. Baked, not fried, these crunchy, twisty, and cheesy treats have 20 percent less fat than leading category favorites, and are available in Cheddar, Cheddar Jalapeño, and Parmesan Truffle. All crunchies are made with sustainable heirloom corn and organic cheese, and are Non-GMO Project Verified. pipsnacks.com

Suzie’s Sprouted Rice Lentil Crisps. These lentil crisps, with sprouted brown rice and quinoa, are gluten-free, vegan, and contain 20 calories per crisp. Sprouted rice is high in fiber, vitamin E, vitamin B-1, vitamin B-6, and magnesium. Lentils are full of fiber, protein, and iron, as well as B vitamins, zinc, magnesium, and potassium. Quinoa is a filling superfood that is gluten-free, high in protein, fiber, and various vitamins and antioxidants. goodgroceries.com

Yolélé Foods Fonio Chips. This African food company and purveyor of the ancient grain fonio, recently introduced its first snack product: fonio chips. Made from fonio and cassava, they come in four flavors inspired by the ingredients and tastes of West Africa. They are Sea Salt, Yassa, Afro-Funk, and Greens! Yolélé’s founders have partnered with organizations on the ground in the Sahel region to establish a sustainable growth model for the tiny, ancient grain that has been cultivated in West Africa for more than 5,000 years. yolele.com 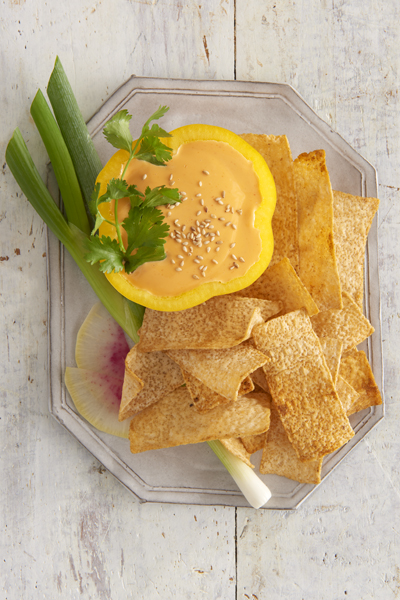 During the pandemic, Americans spent more time at home than ever before. For some, that meant greater access to fresher and healthier snacks. For others, close proximity to their kitchen made it easier to snack more frequently and on foods that they’d tried to avoid in the past, according to Shelley Balanko, senior vice president at The Hartman Group.

“Some were overindulging, and then snacking more healthfully, and vacillating back and forth,” she says. The Hartman Group’s three snack-driving pillars included snacking for nourishment, optimization, and pleasure. “Salty snacks often fall under pleasure and snacks as a reward,” Balanko says. But snacking for the purpose of distraction became so prevalent during the pandemic that The Hartman Group added it as a fourth pillar. “Distraction became such a significant area in 2020 that there was an 8-percentage point increase between 2019 and 2020 in snacking driven by the need for distraction from boredom, stress, or anxiety.”