घर विज्ञान आणि तंत्रज्ञान An asteroid’s moon got a name so NASA can bump it off... 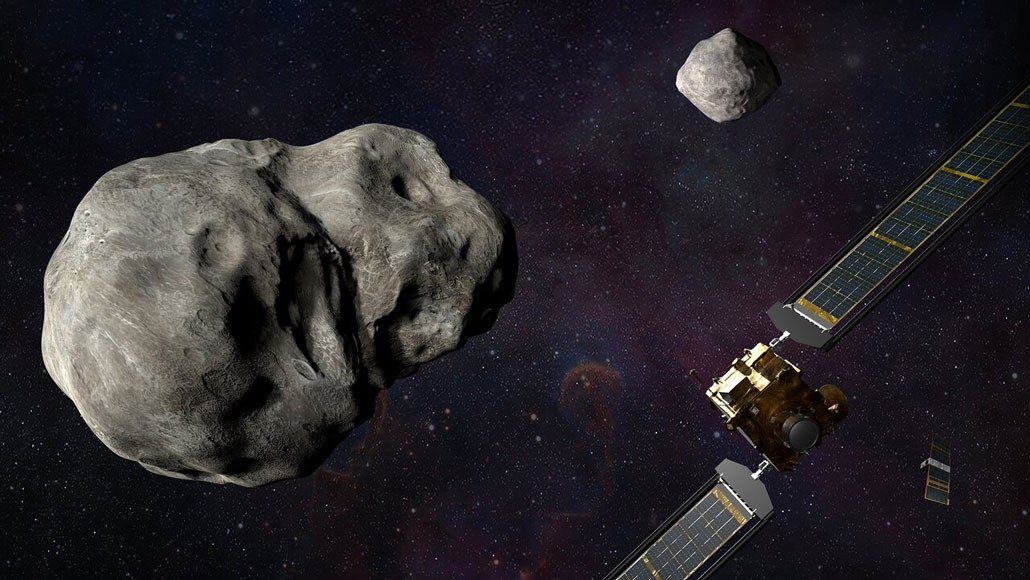 Newly christened “Dimorphos” is a tiny space rock with a big target on its back.

The International Astronomical Union gave the rock an official name on June 23 for a unique reason: It has been marked for the first-ever asteroid deflection mission. A NASA spacecraft will ram into Dimorphos — on purpose — to alter its path through space. Although Dimorphos is not at risk of striking Earth, its nearness to the planet makes it a prime testing ground for a technique to ward off dangerous asteroids in the future (SN: 5/2/17).

Dimorphos is a moonlet asteroid that orbits a larger asteroid known as Didymos. Until now, the moonlet has gone by cute nicknames only, like “Didymoon,” or the ugly designation “S/2003 (65803) 1.” Its new moniker, Dimorphos, is Greek for “having two forms,” in honor of the two different trajectories it will have before and after the spacecraft knocks it askew. At just 160 meters across, about the height of the Great Pyramid of Giza in Egypt, Dimorphos is one of the smallest objects to earn an official name from the IAU.

NASA will launch the Double Asteroid Redirection Test, or DART, spacecraft in July 2021 to crash-land on Dimorphos in September 2022, about 11 million kilometers from Earth (SN: 8/23/19). The collision should nudge Dimorphos into a tighter orbit around Didymos — a change that’s much easier to measure than knocking a solo asteroid into a slightly different orbit around the sun, says Kleomenis Tsiganis, a planetary scientist at the Aristotle University of Thessaloniki in Greece, who is working on the DART mission and suggested the name Dimorphos.

Dimorphos currently orbits Didymos once every 12 hours. By hitting it with DART, “you’re actually changing the orbital period enough — by, say, 10 minutes or 20 minutes — which could be observed even from the ground,” Tsiganis says. Telescopes on Earth will track the immediate aftermath of the crash, and the European Space Agency will send its Hera probe to Dimorphos in 2024 to ensure that the moonlet asteroid is following its new intended path.