Front Burner Foodservice Pitch Competition winner Dinesh Tadepalli is on a quest to save the planet from plastics, one edible spoon at a time.

Dinesh Tadepalli, 33, has a sweet tooth and eats a lot of ice cream. A few years ago, as he was spooning some into his mouth, it occurred to him that his ten minutes of pleasure left a carbon footprint that would last thousands of years. The plastic spoon he tossed in the trash would end up in a landfill somewhere or add to the garbage clogging the ocean. He had no wish to take away the convenience of a single-use spoon, so what if he could develop one that was edible?

As it happens, Tadepalli wasn’t the first person who thought of the concept. Some research turned up a man in India who had started manufacturing them several years before. Still, the idea didn’t leave Tadepalli. He put it on a back burner, busy with his career as a hardware engineer in Silicon Valley. His wife, Sudheshna Vuppala, had just given birth to their first child, a son. The couple was on the same page about finding a mission to make the planet a better place for him. They thought it would somehow involve the food industry, but their personal finances weren’t in a place where they could pursue anything too ambitious.

Tadepalli is from Southern India, descended from a family of business people, and had always wanted to be an entrepreneur. He arrived in the U.S. in 2007 to get a master’s degree in electrical engineering at the University of Southern California and then worked in Silicon Valley. Over the years, he invested in a couple of startups. He made money on one of them and lost money on another.

“I took the loss as a learning experience,” he says. “Why should I just be following the group? Why can’t I do something myself?”

In January 2018, Vuppala gave birth again, this time to a daughter. The company Tadepalli worked for granted him six weeks of paternity leave, four more weeks than he’d gotten at his previous job when his son was born. The idea of leaving the planet a better place for his children became even more urgent. Tadepalli wanted to use the time off to travel, to see what kind of an environmentally friendly food business he could drum up.

“Why are you leaving me?” Vuppala asked him, realizing she’d have to cope alone with their newborn daughter and young son.

“It might be hard for you now, but you’ll thank me later when there’s less plastic in the ocean,” Tadepalli told her. “She was supportive,” he confirms.

They had both been horrified by a 2016 World Economic Forum study predicting that plastic will outweigh marine life by the year 2050. Texas-size, floating garbage patches in the Pacific Ocean were buffeted by waves, washing up on shores and found in the stomachs of sperm whales, sea turtles, and marine birds. Reportedly, about 8 million tons of plastic end up annually in the ocean. Many organisms can’t tell the difference between plastic and food and starve to death because the indigestible plastic fills their stomachs.

Tadepalli knew that something had to change to avert this environmental catastrophe. He thought of making zero-waste cloth shopping bags with 10 pouches to separate produce purchases instead of using plastic, disposable bags, but it didn’t really go anywhere. He also looked into compostable dinnerware and biodegradable spoons made from corn starch. On paper, it sounded good, but the truth wasn’t so pretty.

“Ninety percent end up in landfills, not sent to composting facilities,” he says, so they didn’t break down the way people assumed. Nor were these items edible.

On his journey to India and Malaysia he visited six cities and learned that the manufacturer of edible spoons he’d originally read about had had trouble scaling the business and could not fulfill orders. In Gujarat, India, he met Kruvil Patel, who was already in the process of designing a machine to make edible cutlery. Tadepalli, with his engineering background, thought he could figure out a way to make it work. They agreed to team up and build a manufacturing facility. Tadepalli and Vuppala sold their house in San Jose, Calif. to finance it and moved into an apartment. It took 80 trials to get it right.

The company, called Planeteer, started manufacturing 1,000 edible spoons a day in India in February 2019. The initial ingredients were wheat, oat, corn, chickpea, and barley with a one-year storage life at room temperature. There are no preservatives. They are vegan and protein-rich (but not gluten-free) and will naturally compost within days. The crunchy spoons will stay firm for up to 25 minutes in a hot soup and 50 minutes in a cold dessert and exhibit little flavor unless bitten into, so they won’t overwhelm whatever you’re eating. Current flavors include chocolate, plain, pepper, Indian masala, and vanilla.

Planeteer’s first major order was from a Canadian company that catered to schools. It was for 150,000, so they had to scale up rapidly. Soon, ice cream shops across the U.S. started ordering them. How to package the product proved to be an obstacle. Sealing the spoons in plastic would defeat the purpose, so they figured out paper pouches and recyclable cardboard boxes for bulk sales. In case a spoon breaks during shipping, all orders contain an extra 10 percent.

The biggest problem for his customers, he acknowledges, is the financial cost. Edible spoons are about 20 cents each whereas it’s only three cents for a plastic one.

“I don’t deny that it’s expensive,” he says. “I agree it’s high compared to plastic. It’s a hurdle I’m trying to fix. I tell people to see if the customer is willing to pay ten or 20 cents more and they have found that people feel happy to contribute.”

By 2021, Tadepalli expects to be able to expand his factory facility in order to make half a million spoons a day, reducing the cost by 40 percent. Spoons at 12 to 14 cents each should make it more palatable to business owners and consumers. His goal is to manufacture and sell at least five million spoons by mid-year 2021, expecting that more school and university caterers will sign on as well as the airline and cruise ship industry. 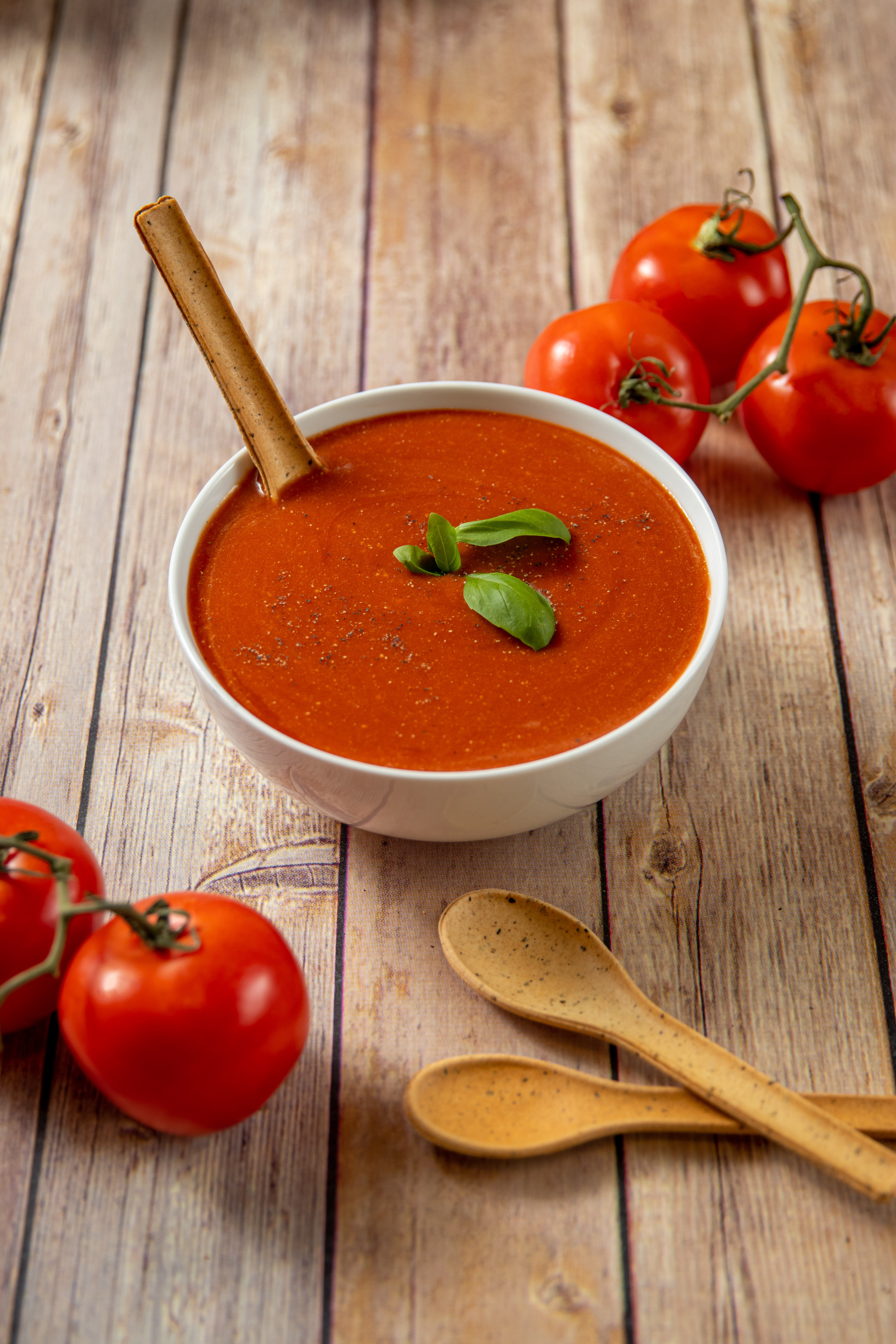 “I thank my kids for making me realize that we are doing it for the greater good,” Tadepalli says. “I never felt bad for selling my home. We are happy that 350,000 less spoons are in the ocean. I’m more happy than when I was in my home.”

Another item he wants to tackle are edible coffee stirrers. “You use it for one or two seconds and throw it away,” he says of the plastic waste. He also intends to make edible ice cream sticks to replace wooden ones. 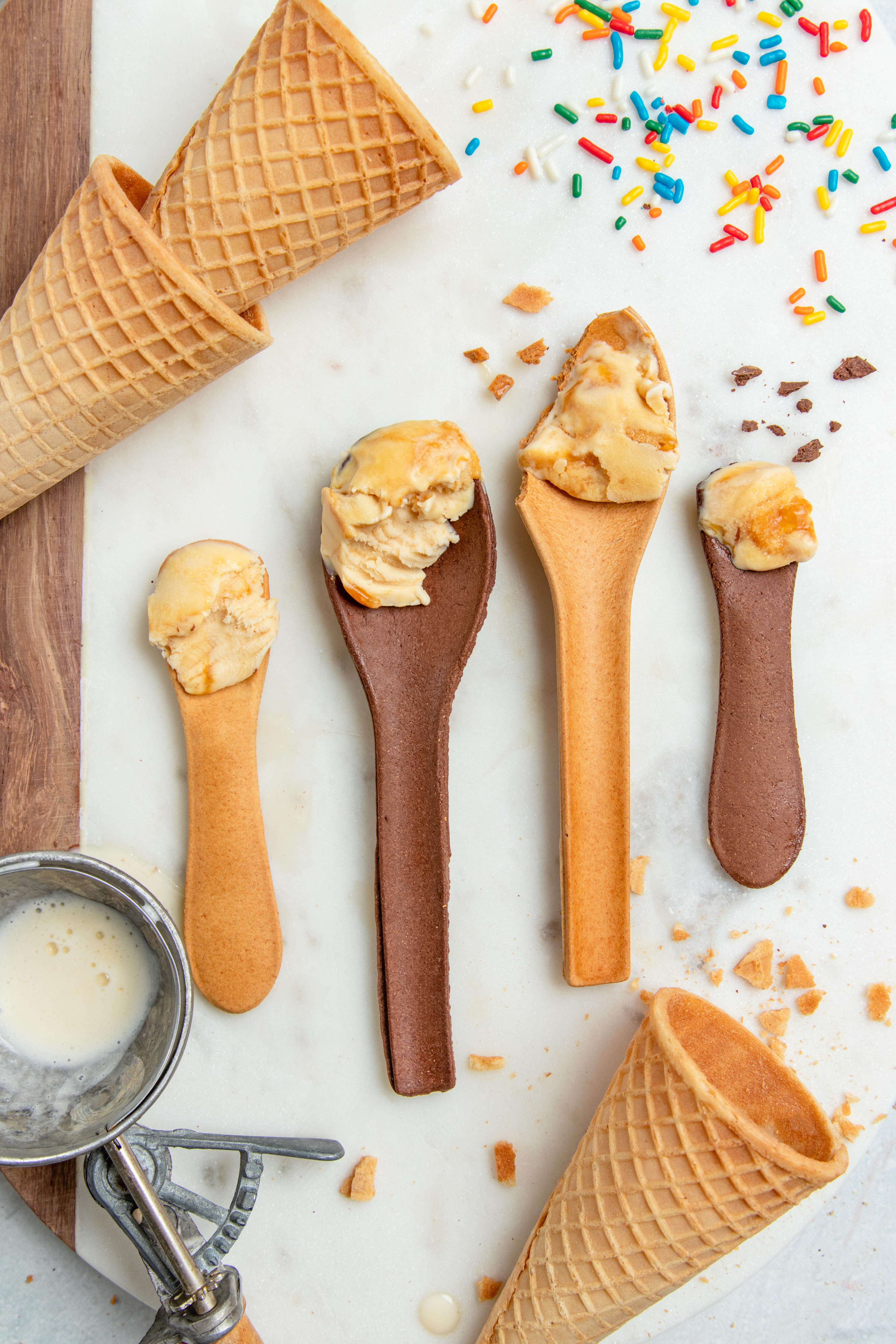 Tadepalli has found that about 60 percent of customers eat only half of the spoon and throw the rest away. It doesn’t bother him.

“If you eat it all, it’s zero waste, and if not it ends up in the compost bin,” he says.

Just months into manufacturing, he applied to compete in the Front Burner Foodservice Pitch Competition at the Winter Fancy Food Show and was delighted to be selected since it would make the product more visible than if he’d just been trying to attract attention from a booth.

“I didn’t feel nervous,” he says of making the presentation to judges and the audience. “My passion supersedes everything. I was not expecting to win. The best feedback I got was from a TV crew that wanted an interview. The anchor had been covering the slam since it started and told me this is the only pitch or product that had so much love from the audience. More than getting the award, this made me happy that it touched their hearts and resonated.”

— 2007  Dinesh Tadepalli leaves Southern India to get a master’s degree in electrical engineering at USC.
— 2008  Starts working in Silicon Valley as a hardware engineer.
— 2015  Gets the idea to make edible spoons after the birth of his son, trying to think of a way to help the planet’s future by eliminating plastic.
— 2018  Daughter born, giving Tadepalli six weeks of paternity leave to travel to India and Malaysia with the goal of figuring out how to start a business that would reduce plastic waste; meets his manufacturing partner Kruvil Patel in Gujarat, India, who is already in the process of designing a machine to make edible cutlery. Tadepalli joins his efforts and together, they build the manufacturing facility.
— 2019  Edible spoons start being manufactured in India; first order of 150,000 spoons is placed by a Canadian caterer.
— 2020  Planeteer wins Front Burner Foodservice Pitch Competition at the Winter Fancy Food Show.

If I weren’t in the food business I’d be: A hardware engineer

One piece of advice I’d give to a new food business: Be visible, show the passion, put your heart out there and new opportunities will open up, given time.

Julie Besonen writes for The New York Times and is a restaurant columnist for nycgo.com.